Our former LBI fellow Lugi Silvano from Turin, who was in Innsbruck from November 2016 to January 2017, published a collection of essays on eduaction in early modern times. Congratulations!

The essays collected in this volume deal with the early modern revival of Greek and how the study and teaching of Greek evolved during the fifteenth and early sixteenth centuries. In this regard, the authors shed some light on the influence of Greek on contemporary literature and the arts, on the methods of teaching and learning Greek, as well as on the cultural connection between Byzantium and the West. 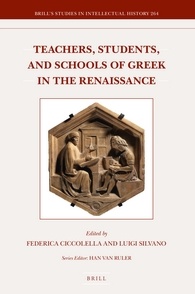